ITINERARY OF A DISCOVERY

Journey of a piece of tribal art : from the rivers of Borneo to the showcases of Saint Germain-des-Prés

View Upper Mahakam from the top that marks the watershed dividing line between the Mahakam basin and that of Barito. Bornéo, Kalimantan, Indonésie. Photo Bertrand Claude.

During a mild tropical evening like those which only Bali can offer, Taty, my partner, and I were peacefully chatting away while drinking a last glass when her mobile phone started to buzz: it was about 9:30 p.m. I thought then that it must certainly be Winda, Taty’s daughter, wanting to know what was the shopping to be done at the market the next day and so I stayed there lost in my own thoughts. But, very quickly, the silences and the tone of the rare words Taty said alerted me; it all sounds very serious. Listening carefully I understand very quickly that it concerns one of our suppliers. To be calling at this time, it must be important! After a few minutes, she hangs up. “It was Anton!” she says. I was startled. Anton had been one of our best object collectors from Borneo for more than ten years and a lot of merchants, American or European, owed him the possibility of having acquired amounts of exceptional authentic pieces. “And what does he want?” I asked, betraying feverishness. I knew Anton for more than ten years. A cultivated, modest, and discreet man, his art hunting talents are worth his advised eyes. If Aton is calling at this time, it means that something has “come out”. “He has sent me photos of a “hampatong” by email, he wanted to know if I had took a look at them”. “So?” I asked. “I haven’t opened my mails yet, today” she answered in a calm voice and without any particular emotion, like are usually Indonesians in critical moments. “Open my computer if you want!”.

These pictures of this hampatong were swirling in my head, and are embarking my thoughts in drastic races coming back and colliding noisily with this only question which has no answer: “what is it?”

One of the photographs attached to email Anton showing Hampatong in its totality. Photo Anton. Copyright Bertrand Claude.

I do not know how to contain my emotions, much less when I receive an alert from an important art beater. I start right away her MacBook and open the mail sent by Aton. At the first glimpse of the joint pictures, I am flabbergasted. After a few minutes, I swing the Mac around in front of her adding: “Have a look!”. Taty as usual, looks at the pictures, taking her time, silently. At last, with a half joking half serious smile, she whispers into my ear: “And you, what do you think about it?”. The next day, we are at the airport at 5:30 am leaving for Balikpapan, East Kalimantan. Then, by taxi, during two good hours on potholed, winding and busy roads, we reach Samarinda, Mahakam’s estuary, where Aton lives, not forgetting to book on the way a room in a hotel. We get there at the end of the morning, in a sweltering heat and sweating. The dry season is settling in. Since the day before, I am as excited as a flea and have had difficulties to sleep. These pictures of this hampatong were swirling in my head, and are embarking my thoughts in drastic races coming back and colliding noisily with this only question which has no answer: “what is it?”

From time to time, our past efforts used to travel up the rivers, paid back with a few beautiful collected objects, like a gift from the forest. 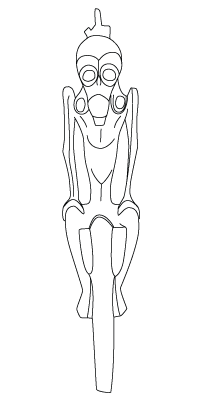 BORN IN THE MOUNTAINS OF BORNEO

This sculpture has emerged ahead of the Belajan River, a tributary of the Mahakam which originates in the mountains of Mount MENYAPA.

Map of the Mahakam and its main tributaries. 1945. Contributor Janis. Library of Congress. USA

When we arrive at Aton’s place, we haven’t taken time to pass by the hotel so as to drop of our luggages because we are in such a hurry to see this discovery. It’s there, laying down on the terrace’s large white checkered floor in this little low ceiling house of the residential district of Samarinda: majestic, imperial, calm (fig. 1). A kretek cigarette in one hand, a burning coffee in the other, I let Taty and Anton chat off, and I concentrate myself on the “beast”. With Aton, we have in common our love for Borneo, for its populations, for its mysteries and its hampatongs. From time to time, our past efforts used to travel up the rivers, paid back with a few beautiful collected objects, like a gift from the forest. It is not always very easy to understand the motivations of tribal art collectors, and much less their feelings. During weeks, and sometimes months, your energy is focused on all the possible supply of informations; maps, books… collectors hunting out every bit of clue enabling them to take a start. And, suddenly, in a few minutes, in a few hours, a piece of art faces you, offers itself to you, to your eyes, to your instinct. Your mind starts to analyze it, to try and situate it in your bank of knowledge. And then we transform ourselves into an emotion, and we become an emotion, only an emotion! The heart starts beating widely, questions invade your mind, memories of preceding discoveries impose themselves like sparks from the past, bits and pieces buried deep down as remains from the visited museums and expositions spring out from the very bottom of your memory; we search in the reading we have done, trying to find again another clue another landmark, another reference point. All this provokes within you an emotional tempest, a state of grace, a sensation of wellbeing; you are all alone in the world! You have to decide yourself… We chatted away until late at night, of everything, there isn’t anything more to say after such a surprise once the important informations have been exchanged: geographical origin, style, tribe, references. Next day, the sculpture flies back with us to Bali. It those not leave its box and is transferred immediately to Paris. It is the end of June. I inform my friend Anthony Plowright that he will have to take delivery of the “package” which is arriving in a few days at Roissy Airport. As for my concern, I arrive in Paris on the 4th of July 2008.